Stockholm, Sweden – Northvolt today announced the signing of a $1.6 billion debt raise provided by a consortium of commercial banks, pension funds and public financial institutions, increasing the total amount of capital raised to date for development of factories and R&D investments to over $3 billion.

“The momentum for electrification is stronger than ever. Our customers need large volumes of high-quality batteries with a low CO2 footprint, and Europe must build a fully regionalized value chain to support them,” said Peter Carlsson, co-founder and CEO, Northvolt.

“The fact that we have these world-class financial institutions supporting a new industry in Europe is a clear sign of where the markets are headed and the opportunity that brings for sustainable projects. This new industrial landscape will need significant investments over the coming years,” said Alexander Hartman, CFO, Northvolt.

Including the $1.6 billion debt raise, Northvolt has to date raised over $3 billion in equity and debt to support the development of two gigafactories for lithium ion battery cell production: Northvolt Ett in Skellefteå, Sweden, and Northvolt Zwei in Salzgitter, Germany. The company is also making significant investments in battery cell technology, process development and recycling at the recently established industrialization factory, Northvolt Labs, in Västerås, Sweden, which produced its first battery cells in late 2019.

Since launching in March 2017 Northvolt has grown to more than 700 people and now employs over 70 different nationalities at its facilities in Sweden, Germany and Poland.

Northvolt Ett, with a potential annual output of 40 GWh, is under construction and scheduled for start of production in 2021. In parallel, the permitting process is underway for Northvolt Zwei, which is being established as a joint venture together with the Volkswagen Group and scheduled to commence operations in 2024 with a potential output of more than 20 GWh. Northvolt also has an operational battery systems factory in Gdańsk, Poland.

Northvolt targets a 25 percent market share in Europe by 2030, equaling approximately 150 GWh of commissioned annual production capacity. At this same time, Northvolt aims to secure 50 percent of its raw material requirements from recycled batteries. The recycling target will be achieved through establishing a full-scale recycling facility at Northvolt Ett.

Northvolt is a European supplier of sustainable, high-quality battery cells and systems. Founded to enable the European transition to a decarbonized future, the company has made swift progress on its mission to deliver the world’s greenest lithium-ion battery with a minimal CO2 footprint. Among Northvolt industrial partners and customers are ABB, BMW Group, Scania, Siemens, Vattenfall, Vestas and the Volkswagen Group. For more information visit northvolt.com.

In pursuit of expanding its offering of electromobility solutions, the BMW Group has signed a long-term supply contract worth 2 billion euros for battery cells with Northvolt. The battery cells will be produced from 2024 at Northvolt Ett gigafactory, currently under construction in Skellefteå, northern Sweden. 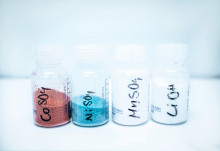 - Northvolt’s recycling program – Revolt – will establish its first pilot recycling plant in Västerås, Sweden, in 2020 - A full-scale recycling plant at Northvolt Ett gigafactory in northern Sweden will be established by 2022 - As recycling capacity ramps up, Northvolt is targeting 50% recycled material in new cells by 2030

Northvolt today announced the signing of a $600 million private placement, led by Baillie Gifford, Goldman Sachs Merchant Banking Division and Volkswagen Group, enabling the company to make further investments in expanding its production and recycling capacity as well as R&D activities to support the target of establishing 150 GWh of manufacturing capacity in Europe by 2030.